All you need to know about Sri Lanka

1. Why should you choose Sri Lanka as your travel destination?

First of all, Sri Lanka is famous for its nature including many majestic trails and abundant wildlife. Sri Lanka is home to Elephants, Jaguar and 100 species of coral, 300 species of fish. Next, the culture triangle is one of the highlights in Sri Lanka. which contains Kandy, Anuradhapura and Polonnaruwa, testifying to the ancient culture of Sri Lanka. Last but not least, Srilanka food is also various with special spices like curry rice. Therefore, Sri Lanka is extremely the perfect travel destination that you are looking for!

2. When is the best time to visit Sri Linka

Because of being a tropical area, Sri Linka is affected by two monsoons in different months. So, whether you travel at any time of the year, you don’t need to worry too much about the weather. In the north of the country, there is no rain from May – July. In contrast, October to January is the most ideal time to travel to southern Sri Lanka. 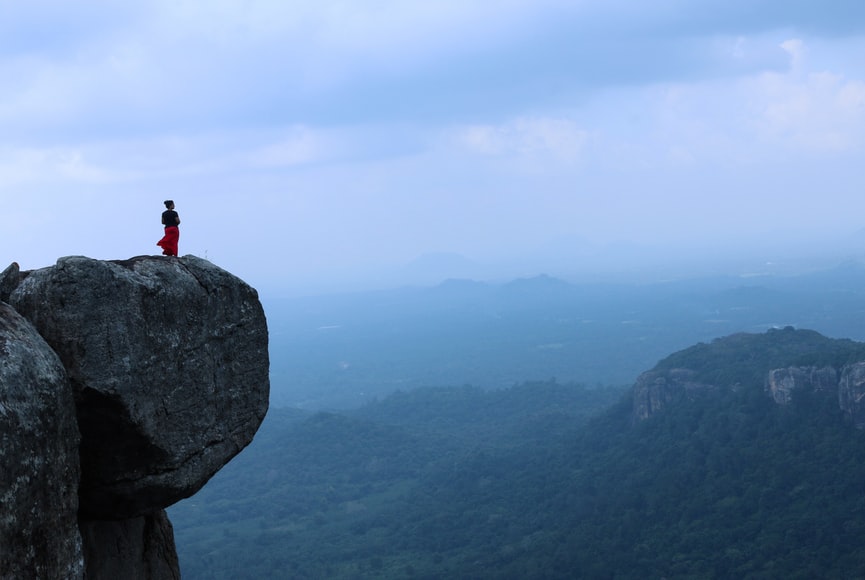 3. What are the top Sri Lanka Tourist Attractions?

Sri Lanka’s rich culture and history, gorgeous landscape and scenery, and plentiful wildlife-spotting opportunities are the main reasons why the country tops many travellers’ bucket lists. Here are the top 10 destinations of Sri Lanka.

Kandy is one of the most popular destinations for tourists and is one corner of the country’s Cultural Triangle. It’s surrounded by mountains of rainforest and tea plantations and is home to a beautiful lake within the city. There are lots of activities that you will be interested in: Visit the Temple of the Tooth; admire the architecture while sampling food from the many street vendors; walk around the lake for scenic views of the lake itself; and make the quick drive outside of the city to the Peradeniya Royal Botanical Gardens to visit its orchid house and its spice garden, the latter of which will take you on an olfactory tour of the country’s native spices. 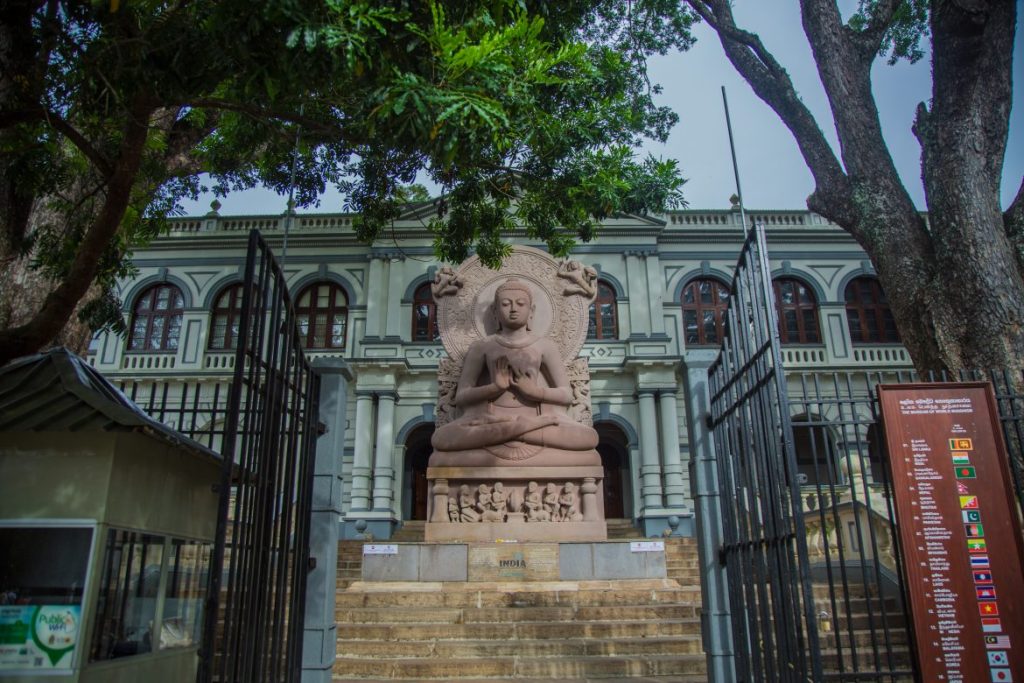 This massive rock formation is not only a breathtaking sight to take in as you approach, but also a place of cultural and historical significance. The UNESCO World Heritage site was a fort and palace that dates back to the fifth century. A network of winding staircases and paths will lead you to the top of the rock if you’re game to make the 1,217-step climb. Along the way, you’ll get panoramic views of the valley around you, you’ll pass ancient paintings by monks on the rock walls, and learn about the kingdom that once called this rock home.

Anuradhapura, one of the three corners of Sri Lanka’s Cultural Triangle and the current capital city of the North Central Province, used to be the first ancient capital in Sri Lanka. Tourists visit this UNESCO World Heritage site to explore the well-preserved ruins and their significant Buddhist history. Several dagobas, distinctive dome-shaped memorials, remain in the city, one of which is said to house Buddha’s collarbone. Another significant site is the Bodhi tree found in the Mahamewna Gardens. It’s the oldest known human-planted tree in the world, and it grew from the southern branch of a sacred fig tree in India, the tree under which Gautama Buddha was said to have gained enlightenment. 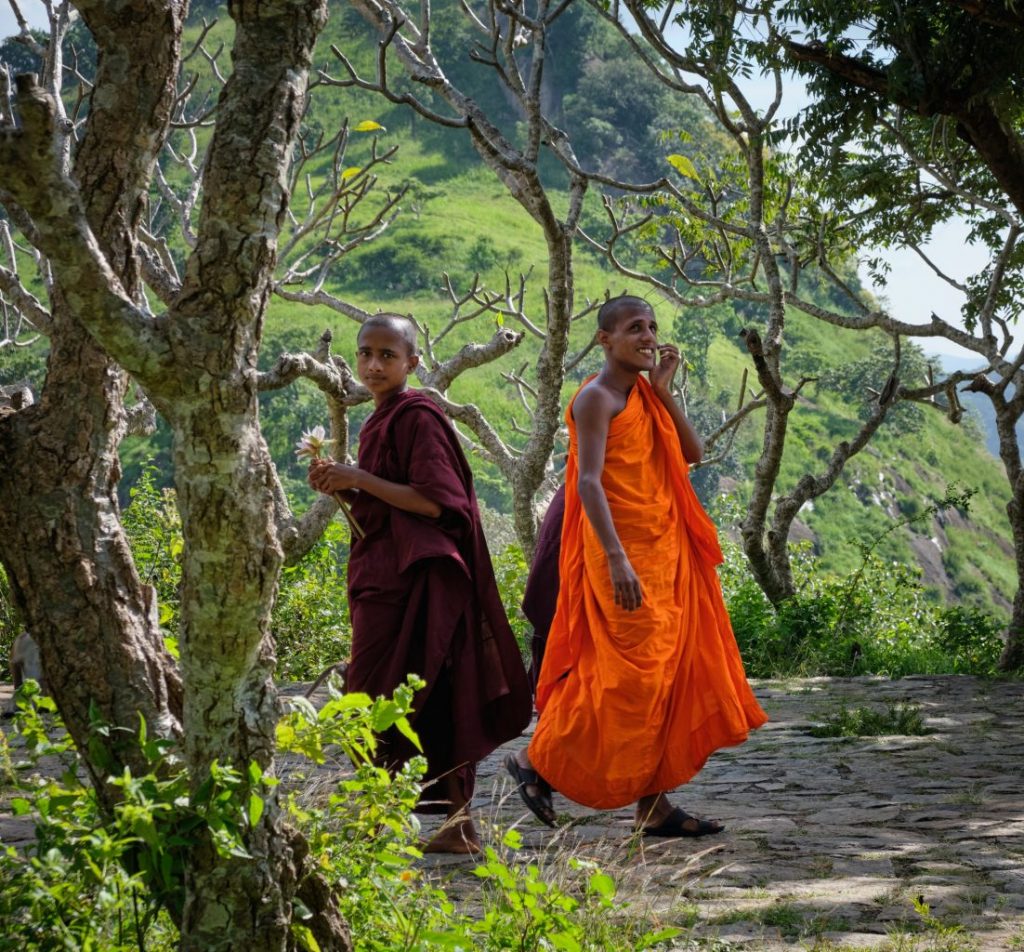 Minneriya National Park is known for having the largest gatherings of Asian elephants in the world. It was converted to a national park in 1997, and Asian elephants still freely roam the grounds in large herds. While you’ll likely get a glimpse of several whenever you visit, the dry season from June to September is the best time to visit, as this is when the elephants will congregate around the reservoir. The park is also home to more than 170 species of birds, as well as leopards, monkeys, and other wildlife.

The third corner of the Cultural Triangle, Polonnaruwa became the second capital after Anuradhapura was abandoned. Polonnaruwa is a draw for visitors interested in touring the city’s history and ruins, including those of the royal palace and other royal spaces, the quadrangle (a raised, walled-off area of monuments and Buddha statues), and dagobas. You’ll undoubtedly spot many monkeys (toque macaques) in the area, and that population of native, endangered monkeys 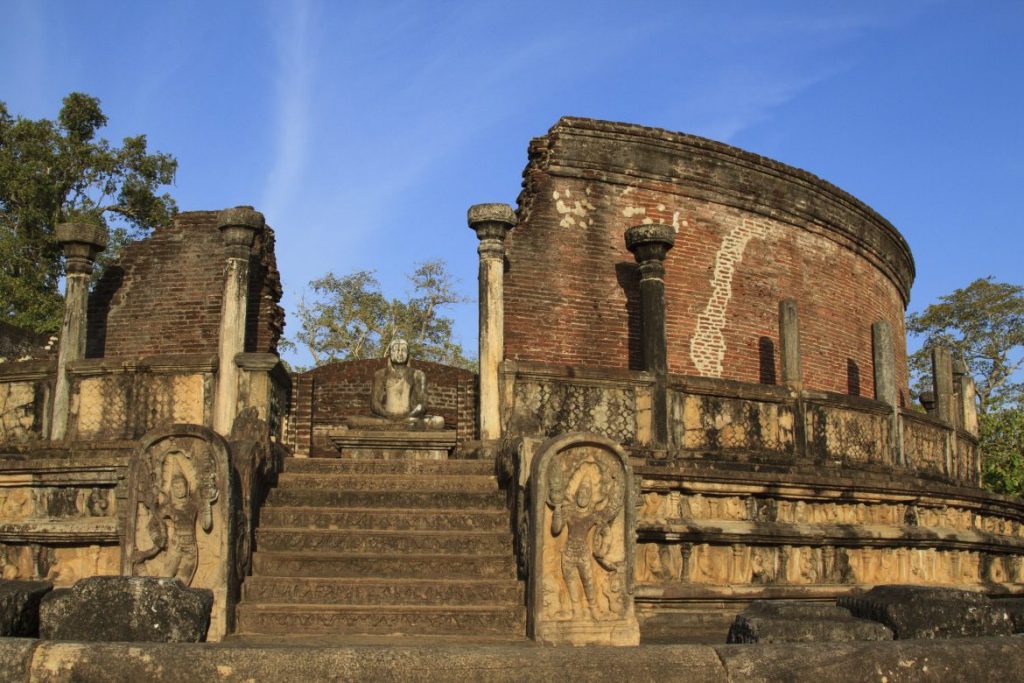 Yala National Park, located along the southeastern coast of Sri Lanka, is the most visited national park in the country, mostly because of the chance to spot the leopards in the area. It is home to one of the largest concentrations of leopards in the world. Additionally, you’ll have the chance to see elephants, crocodiles, and water buffaloes here.

Colombo comprises several distinct neighbourhoods that showcase the old and new—from ancient temples and colonial architecture to modern skyscrapers and city parks. It’s easy to wander and simply take in the sights as you go. One impressive architectural sight you won’t be able to miss is the Jami Ul-Alfar Masjid (also known as the Red Mosque), a red and white mosque in Colombo’s Pettah neighbourhood. 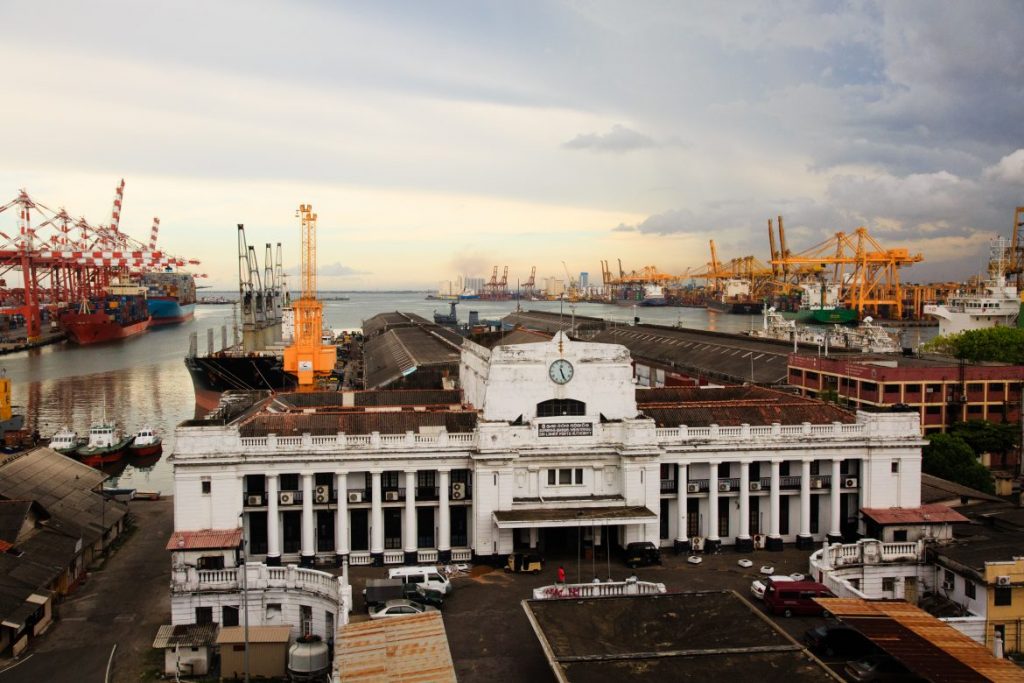 This fortified old city on the southwest coast of Sri Lanka is another one of the country’s impressive UNESCO World Heritage Sites. One of the best things to do is walk along the fort’s ramparts that give you a view out to the water and inward toward the fort and city. You can also take a guided tour to learn about its history and architecture. Additionally, Galle is a prime destination for shopping with many art galleries, upscale markets, and myriad boutique stores selling clothes, jewellery, and souvenirs.

Tea is one of Sri Lanka’s biggest exports, so a trip to the rolling hills of tea country is well worth your time. Nuwara Eliya boasts hundreds of acres of tea plantations and several tea production facilities you can visit to learn about the entire tea-making process from planting to picking and steeping at home. It is also interesting to explore the other gorgeous surroundings of Nuwara Eliya, such as Victoria Park, Lake Gregory, or 350-foot tall Ramboda Falls. As one of the main beach destinations in the country, Mirissa attracts those who are looking for a leisurely vacation of days lounging on the sand and nights out on the town. If you’d rather be out on the water, Mirissa is a surfer’s paradise, especially from October to April, and it’s also a popular destination for whale watching tours to spot blue whales. After a day in the sun, hit some of the casual but lively restaurants and bars, some of which are right along the beach, making them a perfect setting for a sunset cocktail.

4. Activities shouldn’t be missed when travelling to Sri Lanka?

Sri Lanka is an island that you can travel around the year. Therefore, you can experience it to the fullest without weather obstacles.

Take a scenic train journey from KANDY to ELLA

This is one of the most scenic treks in the world with beautiful views of mountains, tea plantations, farms, villages, and forests. The whole trip took about seven hours. There are several different ticket options available. While first-class offers plush seating, privacy, and air conditioning, second or third class are often recommended for travelers looking for a more authentic experience. 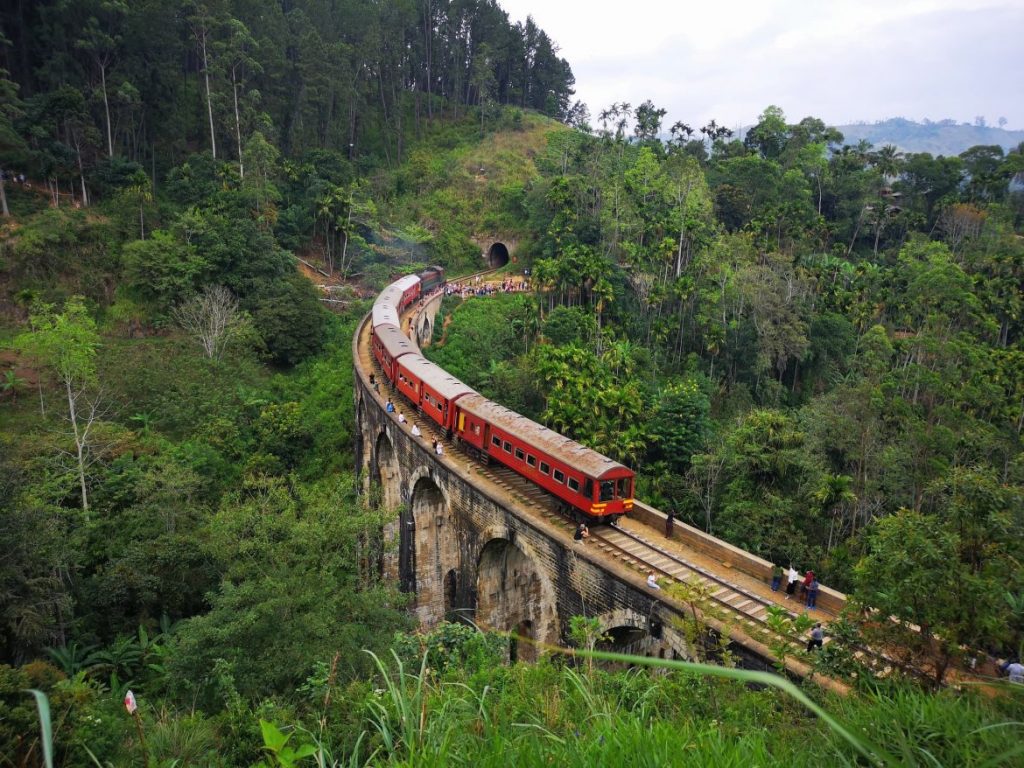 The Royal Palace used to be the seat of power of the independent monarchy known as the Kingdom of Kandy. It was the last royal palace built in Sri Lanka. The original Palace consisted of many different buildings, but only the largest part remained. Today, the Palace is a museum displaying art and artefacts from the Kandy Kingdom and the period of British rule.

Polonnaruwa Vatadage is a religious structure located at the site of the ancient city of Polonnaruwa. It is one of the best-preserved buildings of the Polonnaruwa Kingdom, dating from the 11th to 14th centuries. It is a beautiful example of vantage architecture, a type of Buddhist building intended to protect a stupa, which is very unique in Sri Lanka.

Go to one of the many great WATER PLACES

As an island nation, Sri Lanka is surrounded by beautiful coastlines and has many wonderful beaches where you can go to enjoy surfing. Firstly, you can go to Hikkaduwa which is located along the southwest coast. The best time to go surfing there is from October to April. Next, You can visit Arugam Bay which is on the southeast coast of Sri Lanka. The ideal time to go surfing there is from April to October. You also enjoy surfing around the year in Weligama 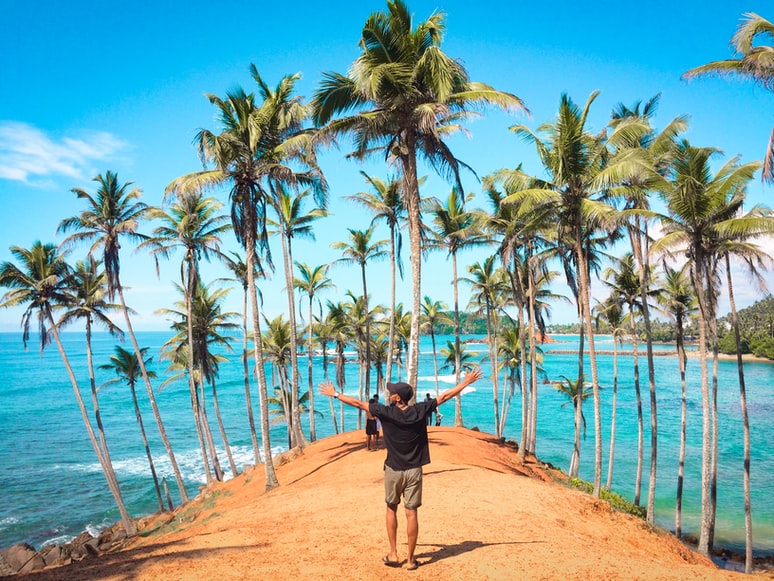 The small town of Mirissa on the south coast is one of the top places in the world to watch the elusive Blue Whale, the largest animal that ever lived. The area is also famous for its abundance of dolphins, as well as other whale species such as humpback, sperm whale, minke, and fin whale. The best time to see blue whales is from February to around mid-March.

Located on the southwest coast of the island, Fort Galle has a long-standing and important history. It was originally built by the Portuguese in 1588. The fortress has been declared a UNESCO World Heritage Site for its way of combining European architecture and South Asian traditions. Extensive rebuilding has helped Galle Fort maintain its beautiful historic appearance, as well as its status as one of the best attractions in Sri Lanka. 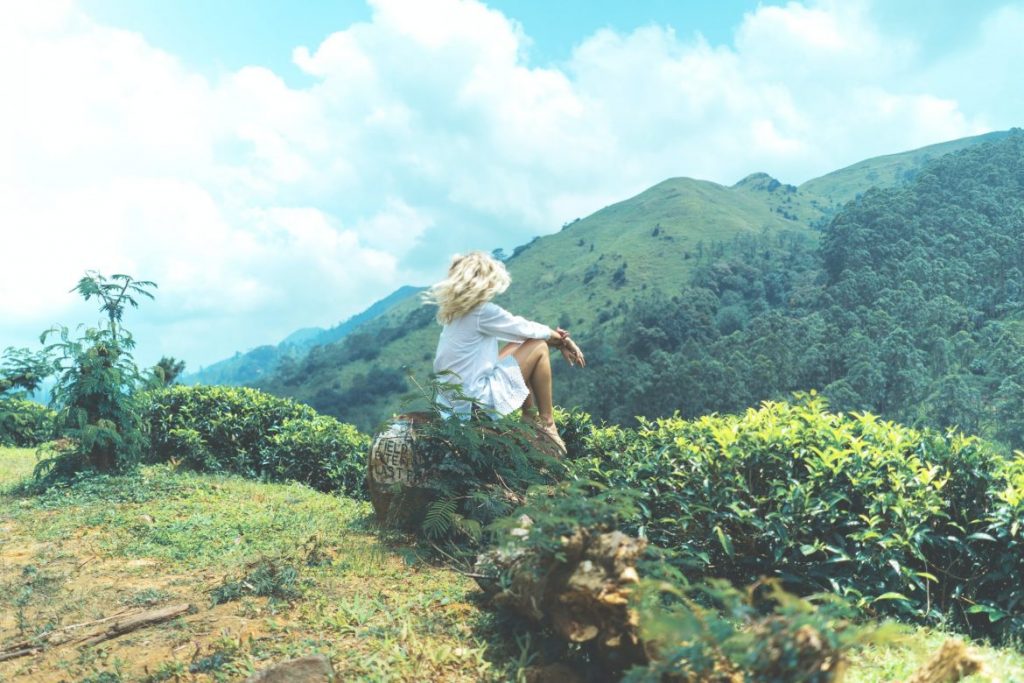 What a wonderful escaping plan for you to do during your holiday! Just pick up your luggage and we will take care of the rest of the journey!
Lux Travel DMC has been turning over 15 years old in the travel industry sector within Vietnam and other Southeast Asian countries. With the prior experiences from the young and potential staff, we believe that these will be helpful for you when planning the holiday to Southeast Asia.
Let us be a part of your memorable trip to Southeast Asia!