Saigon’s Independence Palace stands as a testament to Vietnamese history and as a manifestation of the distant 1960s architecture. Pieces of the past can be found throughout the Palace and if you’re a history buff, this place is next to heaven. Come explore!

The Independence Palace is located at 135 Nam Ky Khoi Nghia in Ho Chi Minh City’s District 1. At the heart of the city, the Palace is within a stone’s throw of many other famous landmarks such as the Notre Dame Cathedral or the Central Post Office. 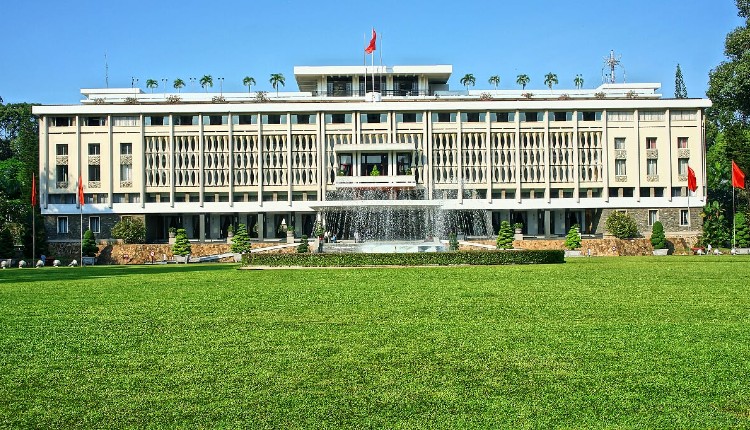 For entry to the Independence Palace, refer to the fees below:

II. The history of the Independence Palace

The Independence Palace started off as the Norodom Palace – a mansion built by French colonialists to serve the Governor of Cochinchina in 1868. With its construction finished in 1871, the Palace became the residence and office for many French governors during the period from 1887 to 1945. After the Geneva Conference was held in 1954, The Norodom Palace was under the control of Ngo Dinh Diem – the Prime Minister of the State of Vietnam. Diem subsequently renamed the Palace to Independence Palace in 1955, making it the symbol for the Southern Vietnamese government back then.

In 1962, the Palace was destroyed beyond repair by uprising forces and was rebuilt from the ground up following the design by architect Ngo Viet Thu. The Palace became fully operational once again in 1966 and served as the office of the President of the Republic of Vietnam. 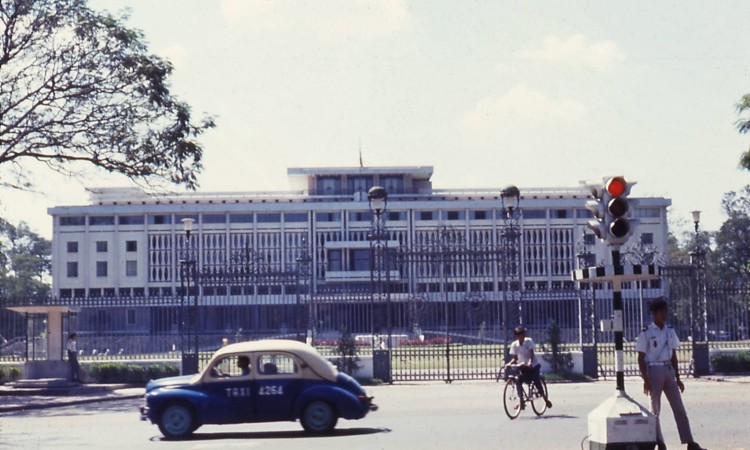 III. What to see at the Independence Palace

The Independence Palace spans across a total of over 120000 square meters, with much of the area covered in lush green trees and plants. A few war artifacts can be found on display around the outdoor campus, along with several tennis courts 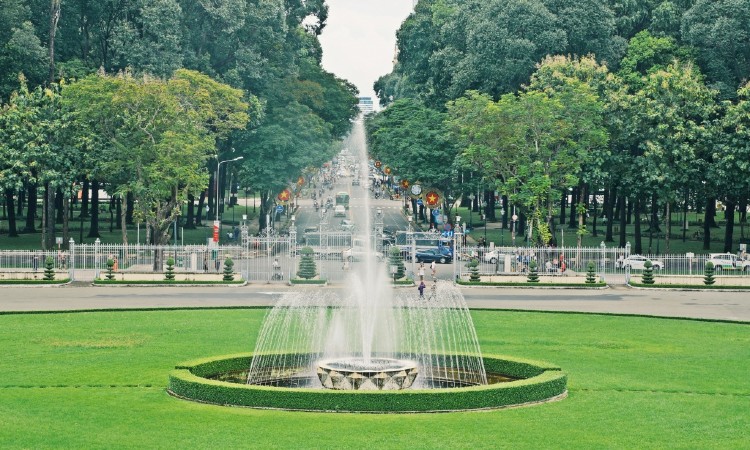 The actual Palace building covers 4500 square meters of ground and consists of 3 floors, 2 mezzanines, 1 terrace, 1 ground floor, and basement. The interior of the Palace remains nearly unchanged and contains a plentitude of informative signs to guide your visit and provide historical context. Unless time doesn’t allow, it is recommended that you take a look at every nook and cranny of this place to understand in full the stories behind this landmark.

The fixed area is likely to be the first area you walk into when visiting the Palace. This area comprises over 100 rooms, each serving different purposes and taking on different styles of furnishing and decoration.

Among the most prominent rooms, the Chamber stands out for its spacious area, which can hold up to 500 people. This room, often used for meetings and receptions, is adorned with splendid tapestries and couches, along with several gorgeous chandeliers emitting a pleasant golden light. 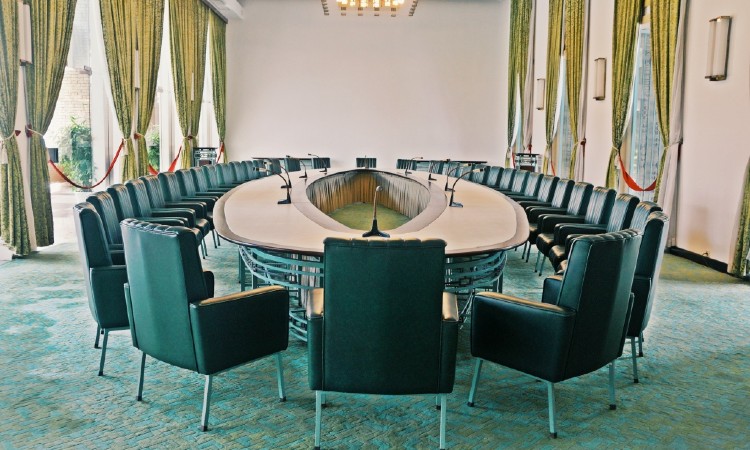 The Cabinet Office where all important meetings were held

On par with the exquisiteness of the Chamber is the Cabinet Room, where internal meetings would take place. A few other interesting rooms include the Library, which houses important books and documents belonging to the old administration and the Strategic Operations Room, where military liaison from 4 tactical regions is handled and strategic plans are made and updated. The bedroom of the President

Additionally, the Basement, which consists of specialized rooms for communications and publication, is also a worthwhile visit. You can also check out the Presidential Family Residence or the Ballroom to get a sense of how life was like for the highest-ranking residents of the Palace. 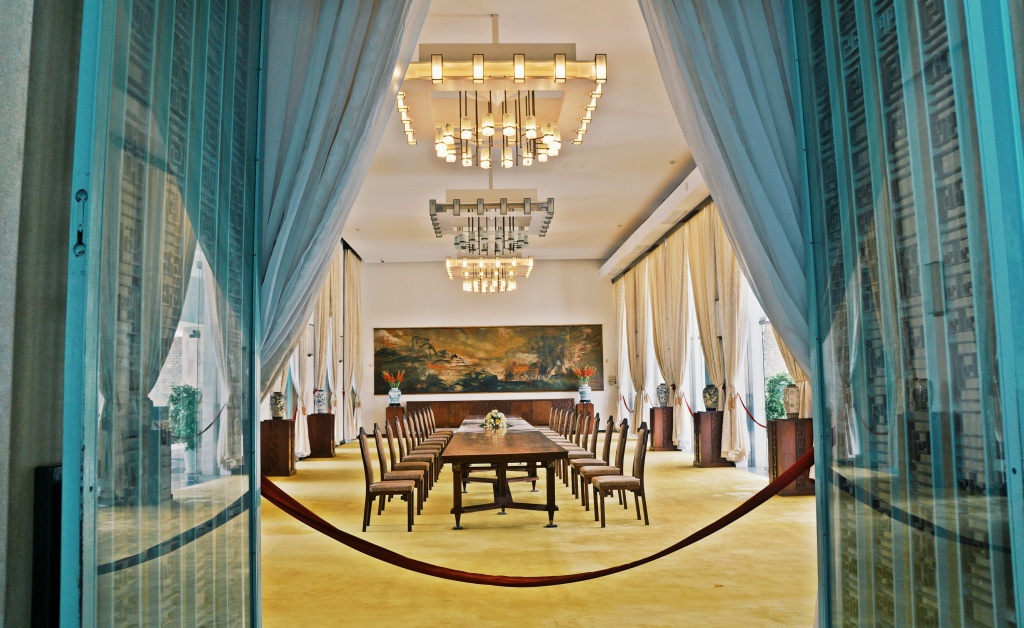 More one hundred rooms of the palace were decorated in different style depending on its use including the Cabinet Office, the throne hall, the working office of the President, the banquet room, the library, etc

The themed area puts on display photos, documents, or items relating to several themes such as the Paris Peace Accords or the Ho Chi Minh Trail. The articles on display are accompanied by explanatory text to ensure you get the most accurate history out of your viewing experience. There is also a dedicated exhibition to detail the history of the Independence Palace itself, called ‘From Norodom Palace to Independence Palace, 1868 – 1966’. The complementary area features historical items recovered after the Vietnam war had ended and peace was established. These photos and documents serve to illustrate the spine-chilling horrors of war, as well as the undying spirit of resistance of Vietnamese people.

The artifacts in the Independence Palace offers a glance at how history played out in times of war. The most prominent artifacts are undoubtedly the tanks 390 and 843 – the duo that knocked down the gates to the Palace to lead the way for the Revolutionary Forces. 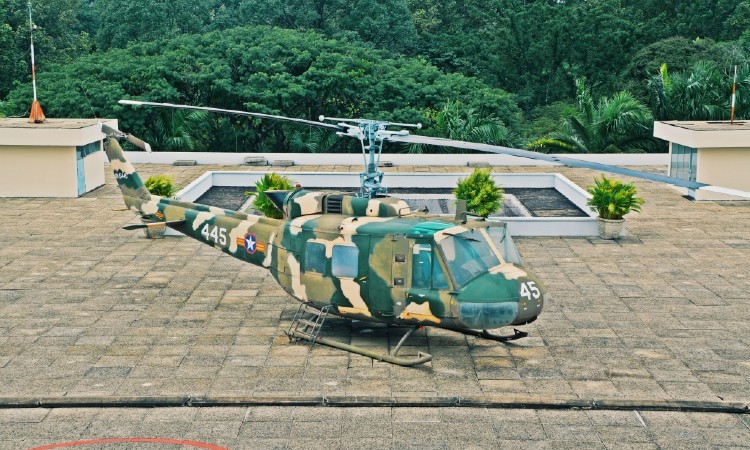 The helipad of The Independence Palace

On the roof of the Palace lies President Thieu’s UH-1 helicopter, placed adjacent to the markings of the two bombs dropped by pilot Nguyen Thanh Trung. The German Mercedes Benz 200 W110 – President Thieu’s vehicle – is also on display, along with the M152A2 Jeep used by the Revolutionary Forces to escort President Duong Van Minh to the Saigon radio station, where he declared surrender on April 30th, 1975.

V. Travel with us

Thrilled to pull back the curtain on the Independence Palace? Book a tour with Lux Travel DMC to get the best out of your trip. We offer custom-made tour itineraries tailored to your demands, along with premium services that cater to your every need and unique cultural insights and experiences from our seasoned guides.