When it comes to Catholic icons in Vietnam, few have managed to stand the test of time for so long as the Notre-Dame Cathedral Basilica of Saigon. Built in the late 1800s, the Cathedral remains a testament to the crucial role that its religion plays in Vietnamese society. 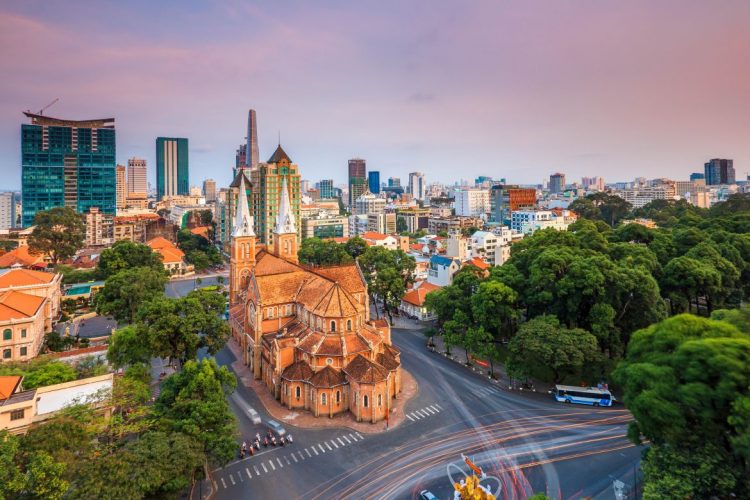 The Notre-Dame Cathedral Basilica is located at the heart of Ho Chi Minh City’s bustling district 1 on Paris Commune Paris street. Right across from the Central Post Office and not too far from the Independent Palace, the cathedral stands recognizably among the city’s most iconic landmarks.

The cathedral opens its doors to worshippers every Sunday when a mass is held at 9:30 AM in both English and Vietnamese.

II. The history of the Notre-Dame Basilica Cathedral 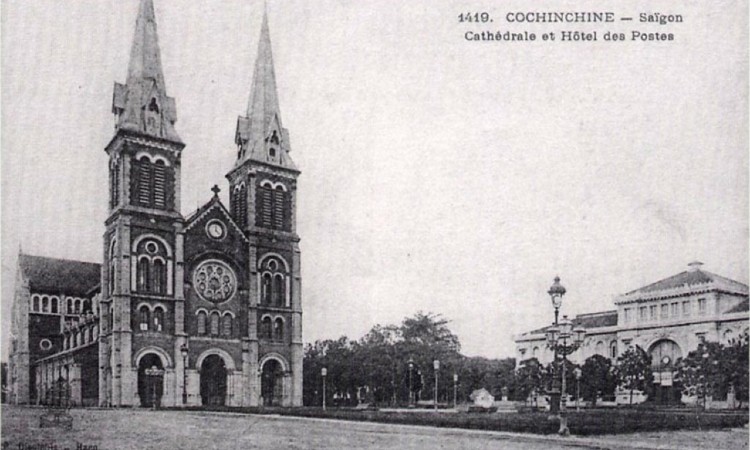 Shortly after the French began their colonization of Saigon, the Roman Catholic Church entered the city bringing religious services for the colonialists. Seeing the lack of an adequately-sized place of worship, bishop Lefevre began the construction of a wooden church in 1863. This church was completed within 2 years and named ‘Saigon Church’, only to be destroyed by a severe case of termites.

A competition was held to determine the designer and supervisor of the church’s reconstruction. Jules Bourard, a religious architecture expert, held the winning bid and decided to build a miniature replica of the Notre-Dame de Paris. His design not only followed the cathedral’s forms but also took on a Romanesque look.

Groundbreaking for the new cathedral was done in a ceremony in 1877 by bishop Isidore Colombert. All building materials were sourced directly from France, including the iconic red bricks that make up the cathedral’s exterior. After 3 years of construction, the completion of the cathedral was celebrated with a dignified ceremony on 11 April 1880. The ceremony was attended by the Governor of Cochinchina.

In 1895, the two bell towers were added to the cathedral, each carrying six bells made of bronze. Crosses were also installed on top of these towers, each measuring 3.5 meters in height. With the installation complete, the total height of the cathedral is 60.5 meters. 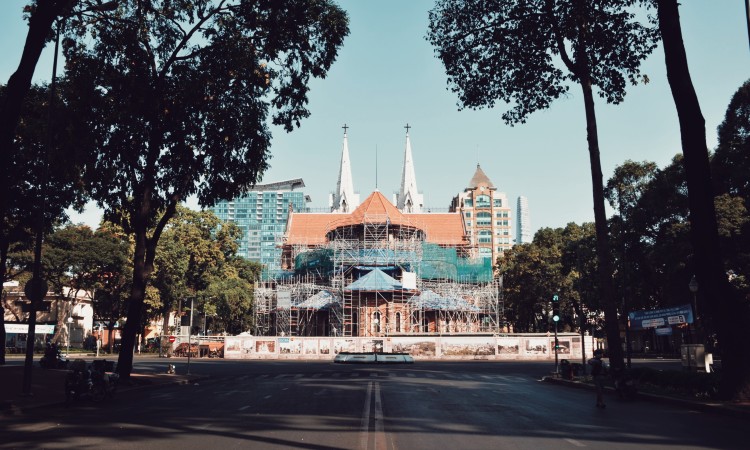 In 1959, the cathedral received a statue of Our Lady of Peace from Rome. The statue is made of granite and was welcomed in a ceremony held by Bishop Pham Van Thien, who was also responsible for ordering it.

Through many name changes, the cathedral is now known as the Notre-Dame Cathedral Basilica of Saigon, with its basilica status conferred by Pope John XXIII in 1962. 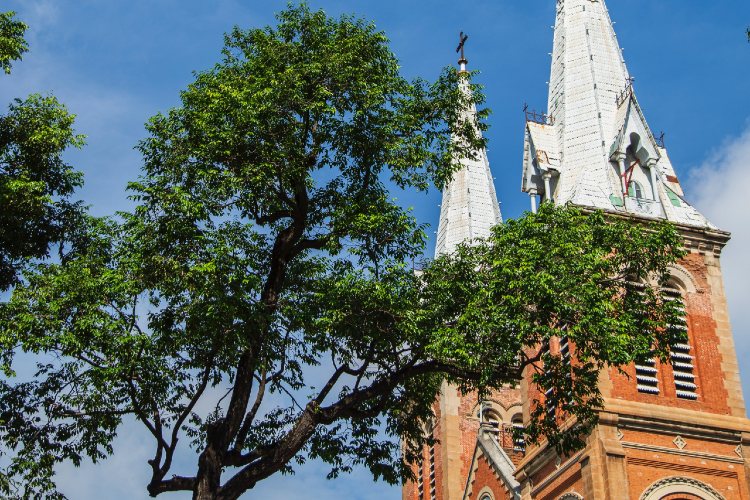 On the outside, the Notre-Dame Cathedral stands out as a more vibrant version of the Notre-Dame de Paris, donned with meticulous architectural details coming from the Romanesque style. The bright orange bricks that make up most of the cathedral’s exterior came directly from the city of Toulouse in France. While the bricks were not coated in any way, they have managed to retain their radiant color.

Another striking feature of the cathedral is a pair of white bell towers soaring into the sky. The pair contains 6 bells each, which are electronically controlled. It is said that you can hear the sound of all 6 bells ringing in unison from nearly 10 kilometers away. 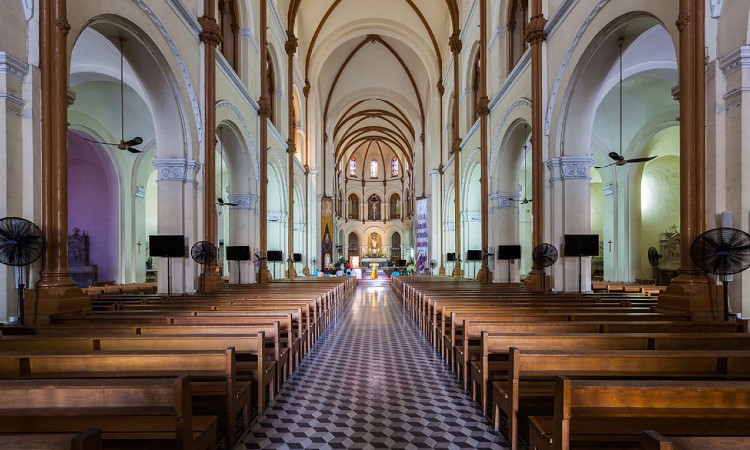 The presence of Romanesque and Gothic architecture is even more prominent in the interior of the Notre-Dame Cathedral. Inside the Basilica lies 2 rows of rectangular pillars with 6 pillars on each, representing the 12 apostles. Immediately behind these rows stands a chapel with over 20 small altars and white statues. A larger alter resides in the cathedral’s sanctuary. This alter is made of marble and adorned with 6 angels carved into it. The walls of the cathedral are lined with 56 colorful glass pane windows describing characters or events from the Holy Bible.

In front of the cathedral is the Paris Commune square where the famous Our Lady of Peace statue stands. The statue is surrounded by multicolor flower beds and flocks of lively pigeons, adding to its iconic symbol of peace. 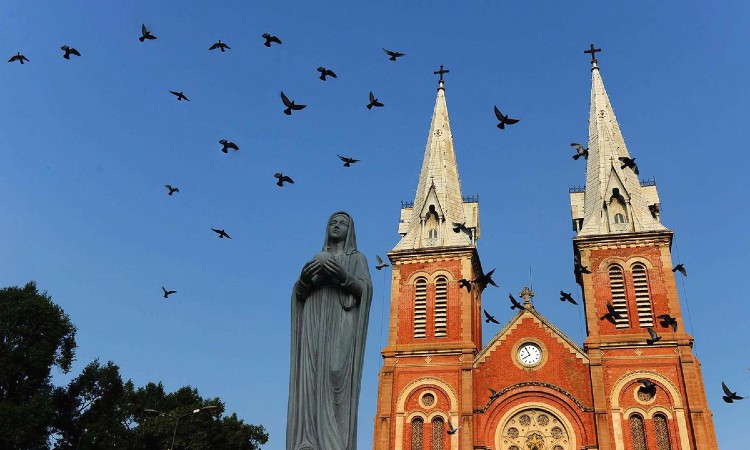 Installed in 1959, the statue made international news headlines when a rumor in 2005 claimed that Our Lady’s eyes were shedding tears. While this could not be confirmed, it did draw much attention to the statue and the Notre-Dame Cathedral.

Nowadays, the square serves as a popular tourist gathering spot for photos and sightseeing. Many followers of Catholicism also make frequent visits here to admire the Queen of Peace.

As of now, the cathedral is yet to be open to public visits, as it is still going through an extensive renovation project that began in 2017 and is expected to finish in June 2020. The project is said to be redoing the cathedral’s tile roof, switching out broken stained glass sheets and wall bricks, as well as giving the foundation some extra reinforcement.

Nevertheless, the Basilica remains a popular photo spot, with the Paris Commune Square still open to any tourists who want a gorgeous shot in front of it. Furthermore, as work on the front of the cathedral has finished, you are free to admire the Romanesque beauty of this landmark from a distance.

Masses are held every Sunday at 9:30 AM in both Vietnamese and English.

As mentioned above, the Notre-Dame Cathedral is across the street from the Central Post Office, which is right next to the Nguyen Van Binh book street. Within walking distance, you can also reach Nguyen Hue walking street, the Independence Palace, or the War Remnants Museum.

VI. Travel with us

Can’t wait to admire the Romanesque beauty of the Notre-Dame Cathedral? Book a tour with Luxury Travel to get the best out of your trip. We offer custom-made tour itineraries tailored to your demands, along with premium services that cater to your every need and unique cultural insights and experiences from our seasoned guides.