Filled with bunkers, shelters, and traps, there’s no better example for the ingenuity of the Viet Cong military forces than the Cu Chi tunnels. The astounding underground structure not only housed Viet Cong soldiers and personnel but also provided medical facilities and many other amenities. For a day away from Ho Chi Minh city, the Cu Chi tunnels are definitely worth a spot on your bucket list!

First of all, it is important to note that there are 2 systems of tunnels which you visit. Both of these systems are located in Cu Chi, northwest of Ho Chi Minh city. The closer tunnel system is the Ben Dinh tunnels, which is roughly 50 kilometers away from Ho Chi Minh city. This system was once the operation base for the Cu Chi Party Committee. While less of a hassle to travel to, the Ben Dinh tunnels are less extensive than the other and may provide a more touristy experience. You also miss out on the opportunity to completely leave behind urban landscapes and take in the refreshing greenery of the Vietnamese countryside, since this tunnel system is closer to the city. 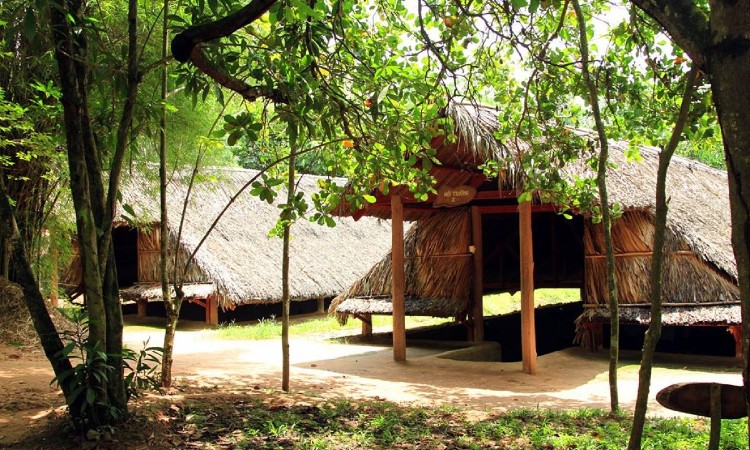 The farther of the two systems is the Ben Duoc tunnels, located nearly 70 kilometers off Ho Chi Minh city. As mentioned, Ben Duoc is the more extensive of the two tunnel systems and provides a far superior experience in terms of authenticity. The system was also more pivotal during wartime, as it served as the strategic headquarters not only for the Cu Chi District, but also the entirety of Saigon – Gia Dinh resistance operations.

So what’s our recommendation? Simply put, go with Ben Dinh if you’re pressed for time, but visit Ben Duoc if you’re up for the most authentic experience of crawling through a past resistance facility. Keep reading for insights on both destinations!

How to get there

There are many ways to get to the Cu Chi tunnels. If you are planning to travel on the cheap, a good option would be via public transportation.

There is no direct bus line from Ho Chi Minh city to either of the tunnel systems, but you can catch bus 13 at the 23/9 park in district 1 to get to Cu Chi Station. From there, you can take bus 63 to get to Ben Dinh and bus 79 to get to Ben Duoc. The price of bus tickets is minimal, and a two-way trip should not take more than 2 dollars. 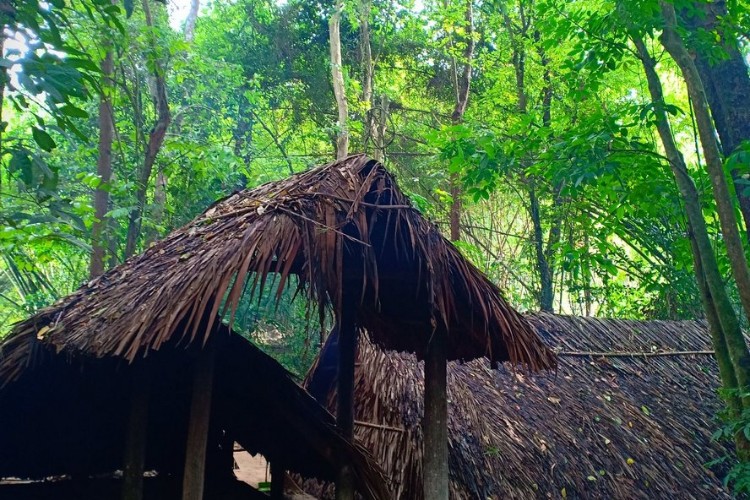 If you feel like taking to the waterways, you can also opt to ride the waterbus at Bach Dang station in district 1. Ticket prices range from 150.000 to 200.000 Vietnamese dong, which is quite higher than regular bus rides. However, the cruising experience offers much in terms of sightseeing, convenience, and speed.

Last but not least, you can also reach Cu Chi quite easily on a trusty two-wheeler. While this is more for the adventurous, renting a motorbike and enjoying a scoot through the varying landscape along the way, from bustling urban to picturesque country, is arguably the best way to reach the tunnels.

Both of the two tunnel systems are open everyday, including Sunday and visitor entry is allowed from 8 AM to 5 PM.

Tickets do come with special discounts for national and international holidays.

II. The history of the Cu Chi tunnels

In the late 1940s, as a military effort during the war for independence from the French colonial regime, the Vietnamese resistance forces began to dig a system of underground tunnels. Due to the lack of equipment, human hands were often the main tool to dig through kilometers of underground soil.

Needless to say, progress was rather sluggish, but it was also consistent. In the early 1960s, in light of the increasing military involvement of the US, the resistance forces further expanded the tunnels to prepare for the oncoming Vietnam War. In fact, the tunnels were extended to as long as 250 kilometers, stretching from the outlying areas of Saigon to close to the borders of Cambodia. 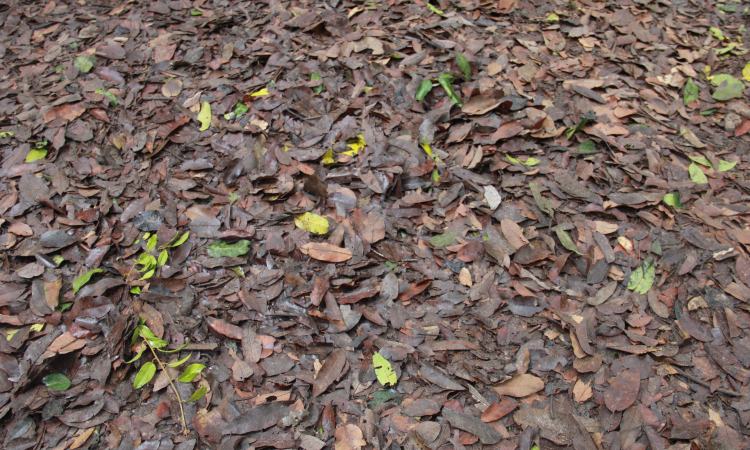 The tunnels were a key component in the North Vietnamese and Viet Cong’s guerilla tactics against their high-tech and well-armed enemies. Specifically, the tunnels provided shelter against aerial bombings – a strategy employed heavily by the US. Underground, soldiers and civilian forces could rest, cook, receive medical care, discuss strategies, or even enjoy some improvised music performances to ease the burden of war.

The disguise is proof of the intelligence of Vietnamese Soldier

Given the importance of the Cu Chi tunnels, the US had launched several campaigns to undermine this extensive underground system. Specially trained soldiers dubbed ‘tunnel rats’ were dispatched to scout the tunnels indicating key areas and traps laid by the resistance forces. 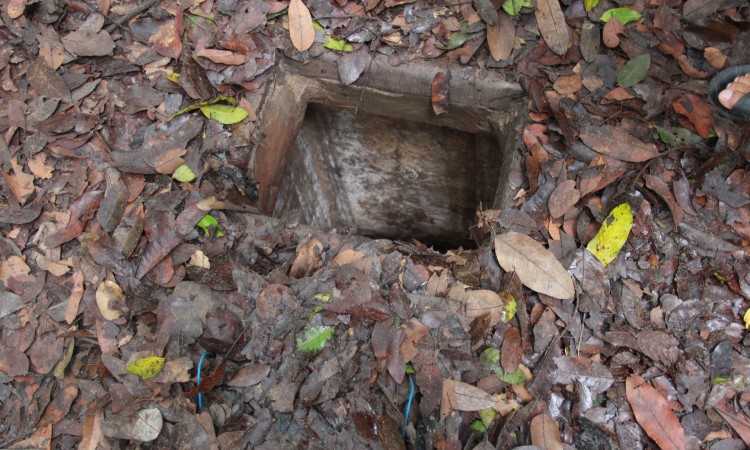 In a 1966 effort called ‘Operation Crimp’, several B-52 bombers were called in to hammer the tunnel area with powerful explosives. This proved vastly unsuccessful and failed to achieve its goal of sweeping the Vietnamese forces out of the Cu Chi jungle, as most of them had already retreated into the deep and nearly unnavigable tunnels. Another approach in this campaign was to seal off tunnel entrances by throwing grenades or pumping poisonous gases into them. Once again, this was to little effect, as the tunnels’ designs and air filtration prevented these attacks from leaving much impact. A similar campaign called ‘Operation Cedar Falls’ one year later at a bigger scale, but only was not able to fully extinguish the resistance forces hiding deep down below. 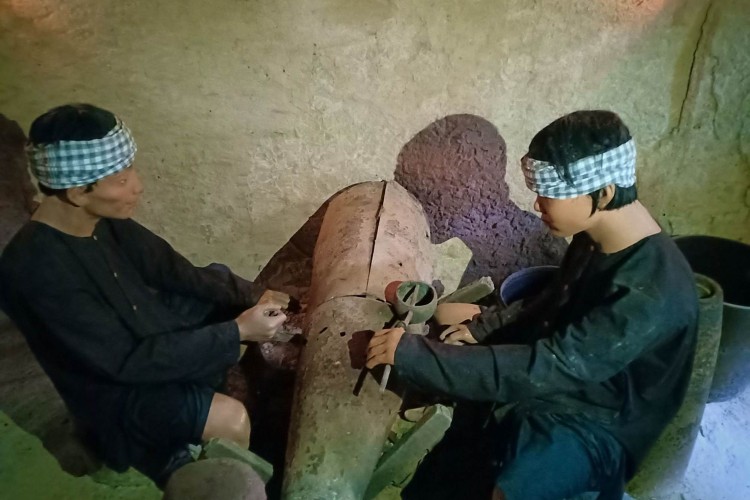 Overall, in its years of active use, the Cu Chi tunnels were a massive strategic advantage for Vietnamese forces, allowing them to control the battle and giving them a place to retreat to. Nowadays, while parts of the tunnels have caved in, the remnants have been reinforced and turned into an attractive tourist destination.

III. What to do at the Cu Chi tunnels

Regardless of whether you choose Ben Duoc or Ben Dinh, the experience of venturing through the underground tunnels that used to house one of the most ingenious guerilla forces is both exhilarating and enlightening. 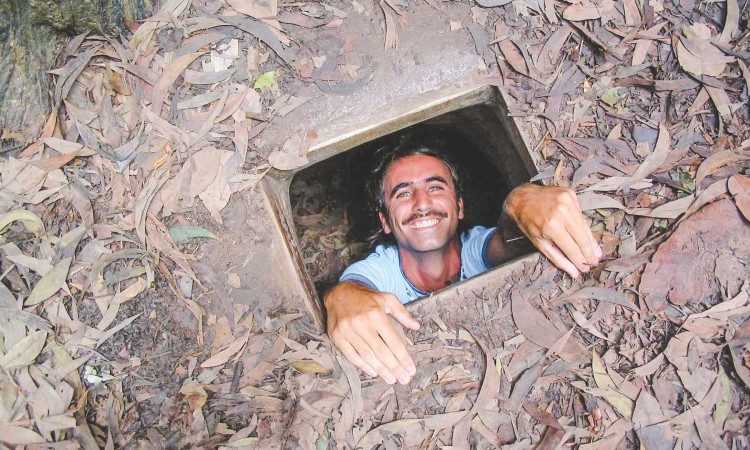 To get the most out of your tunneling adventure, we have assembled a few tips to help you out: The staff there does offer you proper guidance and safety measures to get the most out of your experience, but only people 16 and above who are in good health conditions are allowed to take this activity.

Like most places in Vietnam, Cu Chi comes with its own delectable eats. Here is our list of some must-try culinary items when you’re in Cu Chi:

Beef is everywhere, but beef as soft and juicy as Bo To Cu Chi can only be found here. To achieve its melting tenderness, the beef has to be taken from cows that are no older than 5 or 6 months.

There are a variety of ways in which Cu Chi beef can be prepared and enjoyed. One of the most common way the folks here do it is by steaming thin slices and wrapping them in rice paper with various herbs. Of course, it wouldn’t be a Vietnamese dish without some intricate sauce or dipping, and in this case the options include anchovy sauce, fermented shrimp paste, or the southern-style sweet and sour fish sauce.

Additionally, you can also enjoy some bo nhung giam, which is a mouth-watering beef hotpot with vinegar.

Jackfruit plants can be found in many areas of Cu Chi. Thus, the local produce goes straight into creating one of the tastiest salads of Vietnam. To be made into salad, pieces of young jackfruit are sliced thinly and added to a mix of various herbs or pickled veggies, along with several kinds of meat or shrimp. While the jackfruit itself doesn’t provide much flavor, its chewy texture is the real star of the dish. This salad can be eaten with rice, grilled rice paper, or just by itself.

While not the most inviting dish, boiled cassava roots are culinary icons of the Cu Chi tunnels. The starchy roots were used as the main source of food for the Vietnamese forces residing in the tunnels, as they are relatively easy to cook and fill you up quickly.  Nowadays, you can find this dish in restaurants in both the Ben Dinh and Ben Duoc tunnels, as well as in most restaurants in Cu Chi. Cassava roots are often boiled and eaten with a mix of crushed peanuts, sugar, and coconut milk.

Having filled your stomach with some tasty treats, the next thing you need is definitely a good refreshment. While sugarcane juice can be found in stalls all across Vietnam, it’s Cu Chi that takes the credit for one of the most unique variations of sugarcane juice – the one with durian added. While the smell of durian can be hard to overcome, its mildly sweet flavor and soft texture add wonders to the regular version of the drink. If you can’t handle durian, however, rest assured that most stalls do offer the usual plain sugarcane juice for you to rehydrate.

At the end of the Ben Duoc tunnels stands a grand memorial temple of the same name. The temple was built by the Communist Party Committee to commemorate those in the Saigon-Gia Dinh area who fought and sacrificed themselves throughout both the war against French colonialism and the Vietnam war.

The solemn temple carries an architectural style that is reminiscent of many Vietnamese pagodas and shrines, except for its bright red roof tiles – a symbol for all the blood that had been shed during the two wars. Behind the gates lie a spacious and colorful flower garden, a tower, a grand temple, an inscription house, along with a basement.

Throughout the Ben Duoc memorial temple, you can find paintings, sculptures and statues that depict the Saigon-Gia Dinh people’s heroic fight for freedom and independence. You can also encounter inscriptions of honoring words for the thousands who sacrificed their lives.

The Cao Dai religion, also known as Caodaism, is a distinctly southern religion of Vietnam. Founded in Tay Ninh in 1926 by a Vietnamese official working for the French administration, the religion is unique in worshipping their deity Cao Dai, as well as honoring a range of figures such as Buddha, Jesus Christ, Muhammad, Confucius, Julius Caesar, and more.

The Cao Dai Great Temple, situated within the Cao Dai Holy See, is the grandest of all Caodaist temples and serves as a center for pilgrimage and worship. As peculiar as the religion itself, the temple’s cathedral-like layout and colorful wall and ceiling decorations present a blend of architectural styles that intrigues both the mind and eyes.

Coming here, you are promised a visual feast as you admire the gorgeous exterior and interior of the temple. For those passionate about discovering new cultures and religions, you can relish the opportunity to watch Caodaists carry out their daily ceremonies in dozens.

The Cao Dai Great Temple is roughly 55 kilometers away from the Cu Chi tunnels, making it a great addition to your away-from-Saigon trip. To learn more about the temple, check out our Cao Dai Temples article!

V. Travel with us

Ready to dive into the depths of the Cu Chi tunnels? Book a tour with Luxury Travel to get the best out of your trip. We offer custom-made tour itineraries tailored to your demands, along with premium services that cater to your every need and unique cultural insights and experiences from our seasoned guides.