Groundwork of growing rice in Vietnam

Rice fuels Vietnam’s economy as well as its people’s stomach. The country is among the five largest exporters of rice in the entire world and is among the grain’s top ten largest consumers. Vietnam’s billions of US dollars worth of rice exports each year accounts for a big part of the global total (one-fifth in some years) 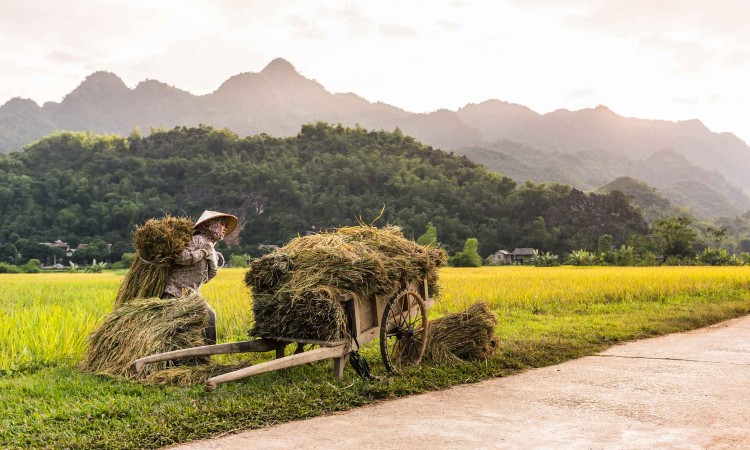 Permanent rice cultivation covers large swathes of the country’s lowlands and smaller portions of the highlands. The primary agricultural areas are the Red River Delta, the Mekong Delta, and the coastal delta in the central region.

Popular in the north of the country, terraced rice fields have been constructed on mountain slopes to cultivate rice. The paddy fields are stepped down with low walls to retain water. They have become a photographed symbol of Vietnam, especially around Sapa, Hoang Su Phi, and Mu Cang Chai areas in the North, which boast the most impressive.

The process of growing rice

Before planting, the land is plowed to stir up the soil so it is ready for the seedlings. Water buffalo are used to pull plows through muddy fields and are ideal for Vietnamese rice farmers because they are well adapted to extremely hot climates and require minimal food management, as they primarily graze on the land they are surrounded by.

After plowing, the paddies are flooded and the seedlings planted by hand in neat rows about 12 cm apart.

Several weeks later, flowers appear on the plants and then the plants produce grains enveloped in husks. In late summer, watering is stopped and the rice is harvested by workers equipped with sharp knives to cut off the stalks at ground level. The rice is bundled and left to dry in the sun. 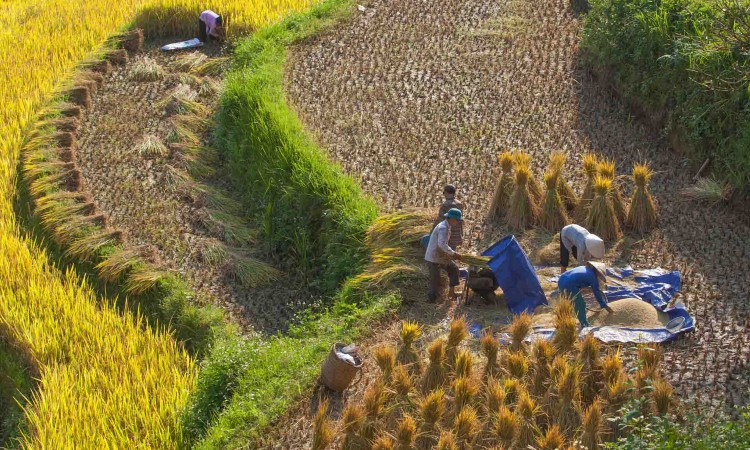 The locals are harvesting rice 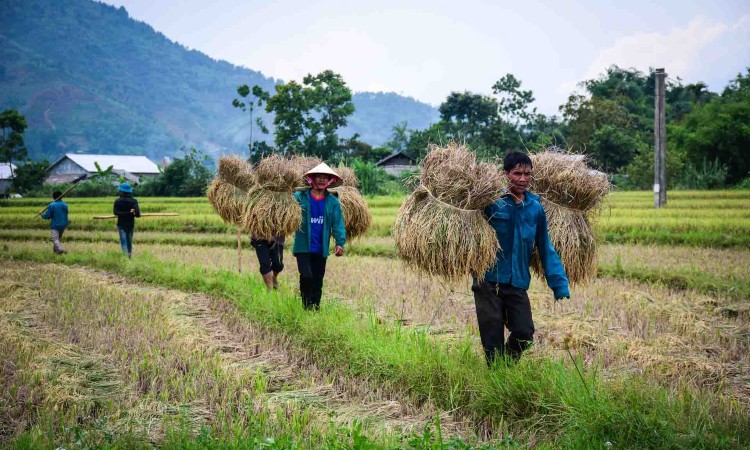 People carry rice on the field in Hoa Binh

How hard it is when growing rice

Rice farmers typically begin their day in the field at 5.30 am and finish at 5.30 pm, but on some occasions, they work well into the night. In the heat of the day, they cover themselves from head to toe to avoid the sunlight. Because the whole process is so labor-intensive, sometimes dozens of people will be working in a rice field at one time.

Rice cultivation is deeply rooted in the Vietnamese psyche. In September 1945, a day after declaring Vietnam’s independence from France, Ho Chi Minh told his cabinet that dealing with the current widespread failure of the rice crop was its priority. In the 1980s his successors promoted hybrid seeds and improved irrigation. But rice farming is not without its problems. Vietnamese rice strains are often believed to be low or middling quality – a contrast to the premium varieties grown in Thailand until recently. The cost of fuel, fertilizers, and pesticides is also rising.

In An Giang province, in the heart of the Mekong Delta, an average family earns just a few million dongs a month from cultivating rice, or about one-fifth of what coffee-growers earn in the central highlands, according to Oxfam.

Two rice crops are typically harvested in the central region each year. Each generally takes three and a half months from planting to harvest, and afterward, the fields are left fallow to replenish the soil in preparation for the next harvest. Just as Vietnamese farmers continue the tradition of using buffalo to plow and turn the soil, they also continue to practice traditional irrigation methods. To bring the water to the rice fields from large channels, Vietnamese farmers use a small device, called “gau”, which is made from wood and bamboo. The device used to irrigate the rice paddy is a pyramid of three bamboo sticks tied together at the top for balance. A rope is attached to both the scooper and the bamboo above. The water is then distributed to the smaller water-starved irrigation channels. Although time-consuming, physically taxing, and less efficient, this traditional form of irrigation is effective and requires no electricity.

Rice – a key stable in Vietnam

Given the grain’s importance as a staple of daily life, it’s no surprise that different regions have developed their unique rice dishes:

Chicken rice in Hoi An 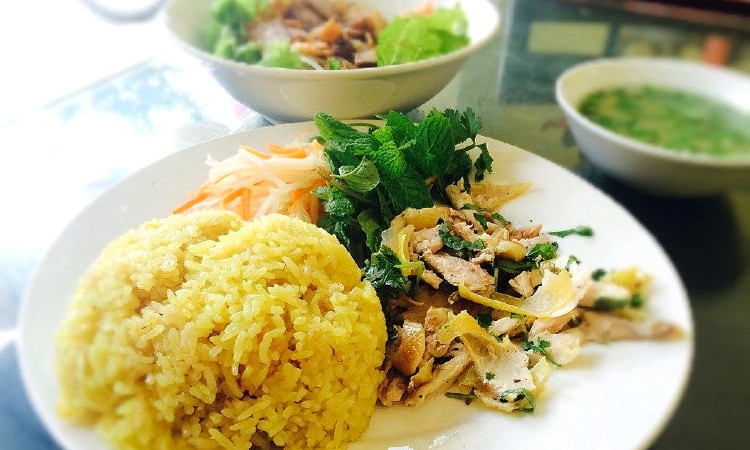 Savory chicken rice is a local favorite in the ancient town. The dish is cooked with chicken bouillon and a dash of turmeric – the reason the rice is not white as normal but light yellow.

Though its recipe includes only rice, chicken, coating sauce and pickled vegetables, it’s not that easy to cook. It’s said only a true Hoi An cook can get the right flavor. The chicken is torn into small pieces and then mashed with crushed onions, coriander, and other spices. Springy chicken pieces and fragrant rice are then served with peppermint, shredded green papaya, and pickled vegetables. 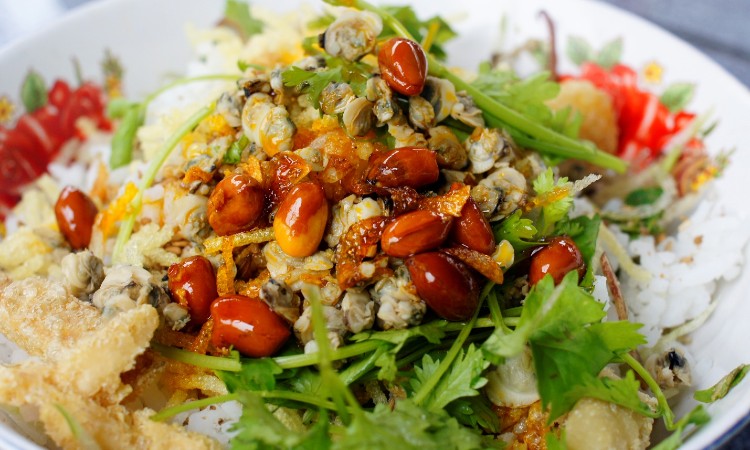 This is a special delicacy of the former imperial capital. With a rather complex recipe, including crunchy cold rice, baby clams, fried pork fat, banana flowers, fermented shrimp sauce, sliced star fruit, and various spices, Hue’s baby clam rice is sweet, buttery, salty, sour, bitter and spicy all at once. 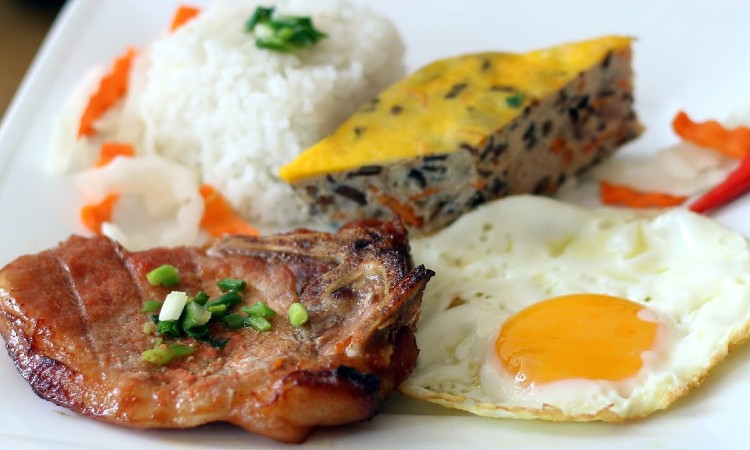 “Tam”, or broken rice, is rice that has been broken into small segments (two or three pieces). The main ingredient of the dish is a very cheap kind of rice combined with grilled pork, pork skin, egg, and fish sauce, to awaken all the senses. 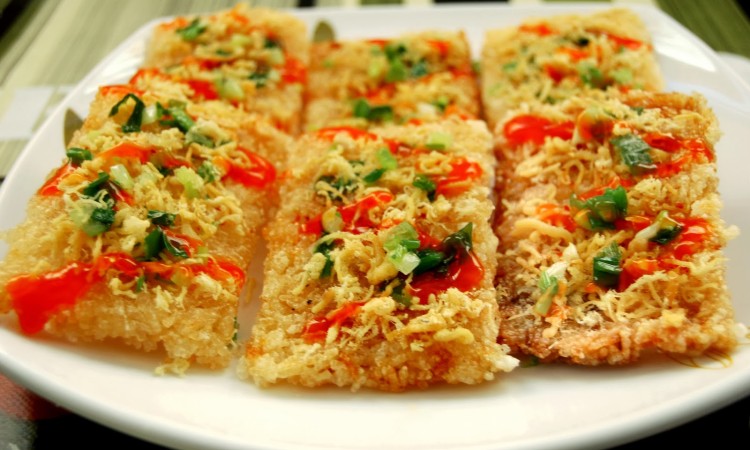 Burned rice was developed from a 100-year-old Chinese recipe.

It uses aromatic sticky rice cooked in steel pots and then dried under bright sunlight for two to three days.

After drying, it is divided into round shaped slices that are then soaked in hot cooking oil until it has turned golden. The burned rice slices are served with a special soup of pig’s heart and kidney.

As its name suggests, this dish has cooked rice and green crab flesh. To strengthen the flavor, people add some sliced onion, garlic, cooking oil as well as traditional fresh tomato sauce. The green crab flesh is sautéed with garlic and onion till brown then added to the rice and seasoned with spices and tomato sauce. 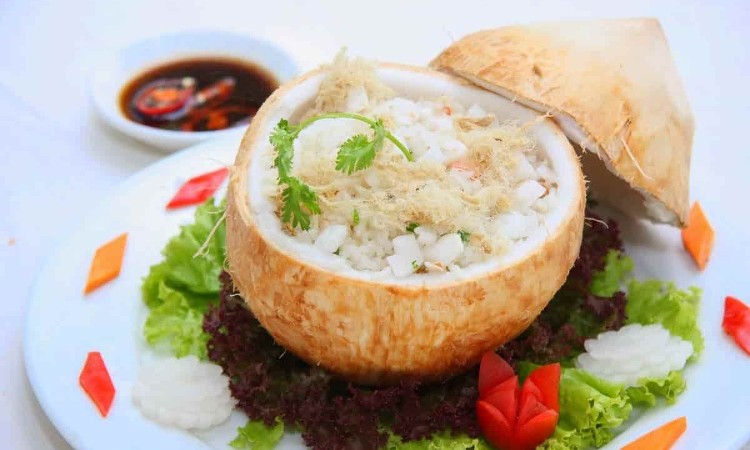 Coconut rice is made from sticky rice cooked on a medium fire until the rice grains are broken down into tiny grains. Coconut milk is then poured in with a little salt and boiled until it condenses.

Despite the name, this is a delicious culinary specialty of Hue. Aromatic rice, thin julienne bacon, pork bologna, shrimp paste, grilled spring rolls, egg rolls, herbs, and cucumber are all blended in harmony in a dish that is both delicious and nutritious Bamboo rice is made from sticky rice and various other ingredients, all stuffed into bamboo tubes and then heated on a fire. Bamboo rice is a specialty of minority people in Vietnam’s mountainous regions.

Vietnamese believe that a clay pot is the best choice for cooking this dish, as it increases the flavor of the rice.

When preparing beaten rice at a restaurant, the cooks beat the clay pot with a small hammer to produce a nice, yellow, rounded-shape rice inside. The rice is served with simmered fish, pickled vegetables, and shrimp sauce.

Ni rice of Cham People in An Giang

Ni rice is a traditional dish of the Cham people in An Giang province and usually cooked with milk, though some like to add dried grapes to increase its flavor.

Rice is used for a multitude of things throughout Vietnam, including rice wine, rice noodles, rice vinegar, and rice crackers. The grain is exploited to its fullest potential and nothing goes to waste. Even the rice husks are used to burn the fire that cooks the rice paste for the rice crackers.