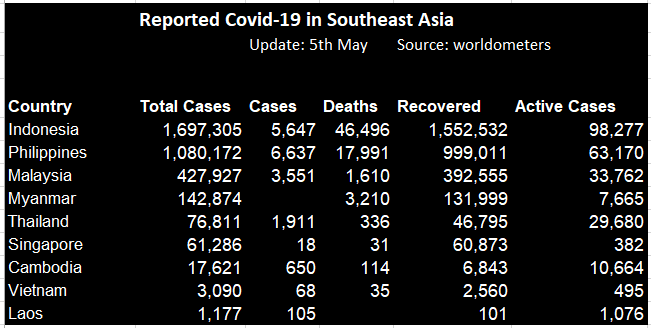 According to the website worldometers.info, as of 23:59 on May 5, the Association of Southeast Asian Nations (ASEAN) countries recorded 176,735 more cases of COVID-19 disease compared to 1 day ago, while the total number of deaths increased to over 69,440 people. In the past 24 hours, the ASEAN association had up to six member countries that recorded COVID-19 deaths: the Philippines, Indonesia, Myanmar, Cambodia, Thailand, and Malaysia. 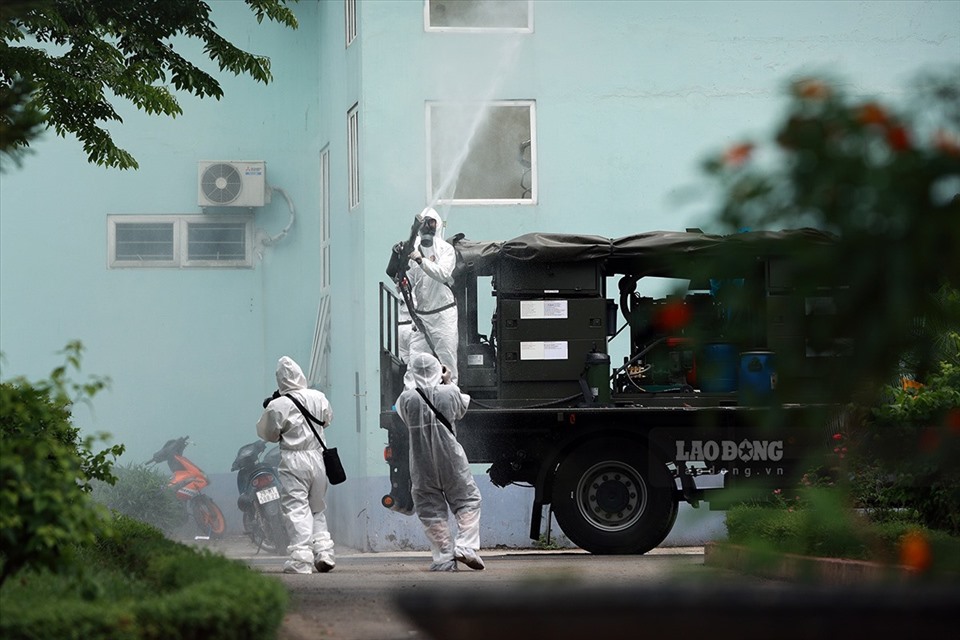 Disease developments in Vietnam are also happening quite complicatedly. Since the end of April, 50 new community infections have been found in 15 provinces.

Specifically, the SARS-CoV-2 virus has so far claimed the lives of a total of 69,448 people in Southeast Asia, an increase of 301 cases compared to a day ago. While the number of cases increased to 3,753,178 cases. Besides, the ASEAN region also witnessed the number of patients successfully treated in 3,125,011 cases.

Below is the specific disease situation of Southeast Asian countries:

This Covid-19 outbreak, which broke out on April 29, has so far recorded 64 cases of community infection. Since the beginning of the epidemic, a total of 3030 cases have been recorded positive for Covid-19, including 1634 cases of domestic infection. 2560 recovered cases and 35 deaths.

Before April 29th, Vietnam had a very good pandemic control and did not have any community infections. Since then, Disease developments in Vietnam are increasingly complicated when new cases of community infections have been found in 15 provinces recently. Many provinces in Vietnam begun implementing partial social stretch measures, such as closing restaurants, karaoke bars, or temporarily leaving students out of school. The Ministry of The Health of Vietnam has decided to increase the number of days of compulsory concentration quarantine for suspected cases to 21, instead of 14.

Overall, Thailand was able to control the COVID-19 pandemic in its early stages through limited measures and strict border controls. However, the country is grappling with a third wave of deadly infections that started in early April with the more infectious B117 variant. 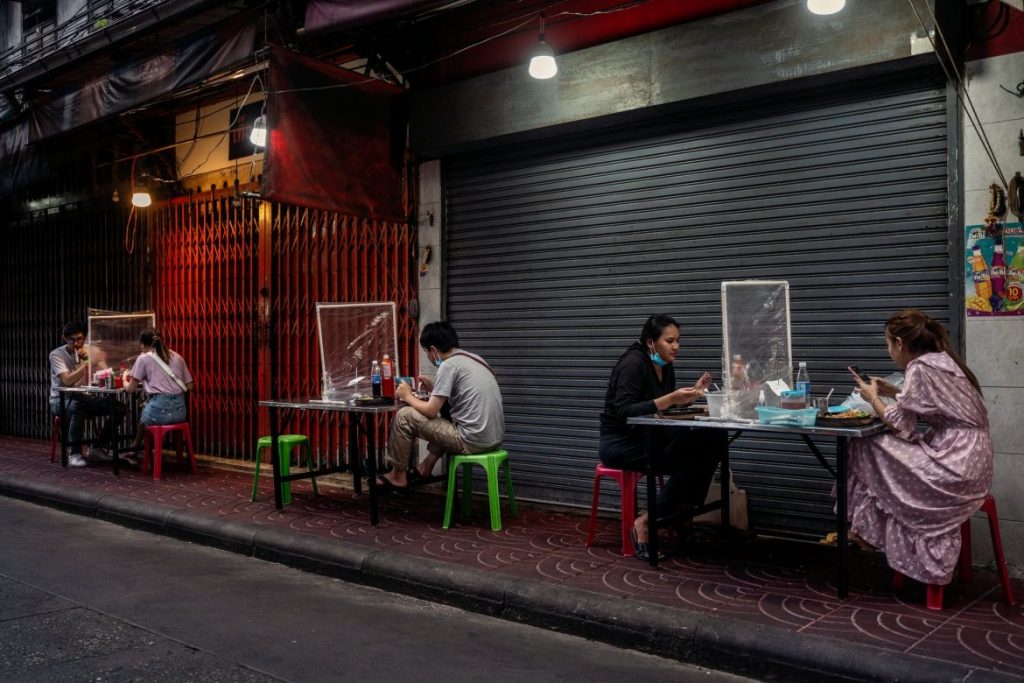 However, this country still faces a high new number of cases of community infection. On May 5, Thailand recorded 2,112 new cases and 15 deaths, bringing the total to 74,900 cases, of which 318 died. Most of the new cases are infectious in the community. Bangkok capital continues to be the center of the epidemic when it recorded the highest number of new cases with 789 cases.

Although Indonesia is still the most serious outbreak of COVID-19 in ASEAN, the epidemic situation in this country trends to go down compared to the last period. In the past 1 day, Indonesia had the highest number of deaths in Southeast Asia and the second-highest number of new cases.

Meanwhile, developments are returning and serious outbreaks in the Philippines, making the country the hottest outbreak in the region. The epidemic progressed badly with the number of new cases/day is higher than in Indonesia.  and the highest among Southeast Asian countries. The number of deaths had never decreased compared to the previous days.

Malaysia is still very concerned about the situation, the new epidemic wave has prolonged and there is no sign of cooling off. This country is witnessing the trend of epidemic escalation again due to the rapid increase in the number of new cases per day in the past few days. 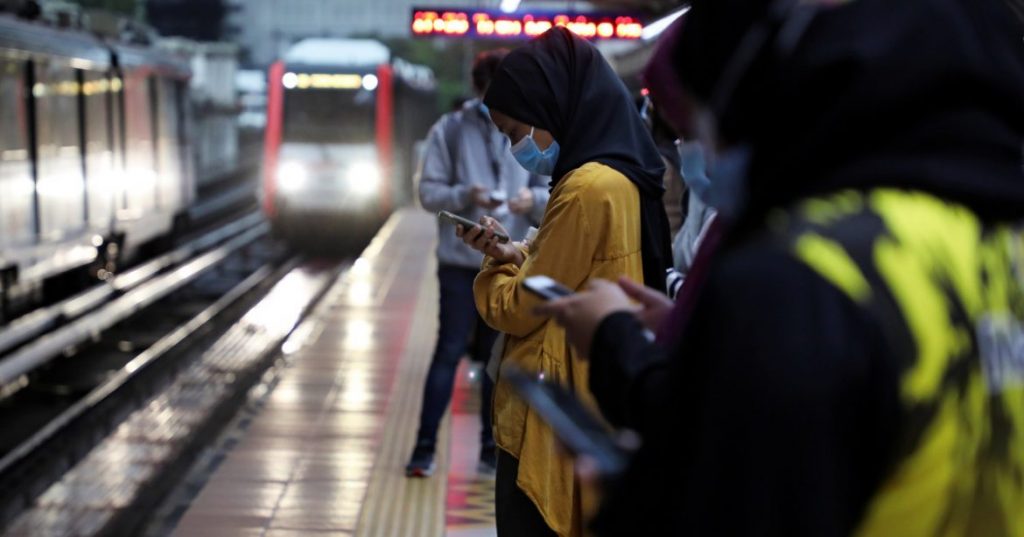 Laos:
Laos saw 105 new cases on May 6, taking the total to 1,177.
Vientiane capital applied for the blockade order from April 22 to May 5. The other provinces also implemented the blockade order and on April 28.  The number of new cases decreased on May 1st however, it has increased back on the following day.  At a press conference on May 5, the Lao Prime Minister announced the extension of lockdown in Vientiane till May 20.

Recently, the new cases are going down. However, the authorities continue to tighten the most stringent epidemic prevention and control measures.

All you need to know when travelling to Phuket from July