On July 23, Cambodia received the first 330,000 of an expected 1 million AstraZeneca vaccine doses donated by Japan through COVAX.

On July 23, Cambodia extended ongoing business and gathering restrictions in Phnom Penh through at least August 6. Schools and high-risk businesses such as casinos, cinemas, nightclubs, and sports centers will remain closed. Gatherings continue to be limited to 15 people, except for family members living in the same residence and for funerals.

On July 27, the Ministry of Health announced that the state-licensed Pharmaceutical Export-Import Institution can apply to import Covid-19 vaccines approved by the World Health Organization and distribute them to private healthcare providers.

On July 23, the Indonesian government tightened restrictions on foreign workers arriving in the country.

The government on July 25 announced that small businesses and select shopping malls would reopen despite the extension of Covid-19 restrictions.

The government on July 26 delayed plans to establish a travel corridor with Singapore.

Pharmaceutical company PT Kimia Farma on July 27 postponed a planned program for individuals to purchase their own vaccines over concerns that it would halt the distribution of vaccines to underprivileged populations. 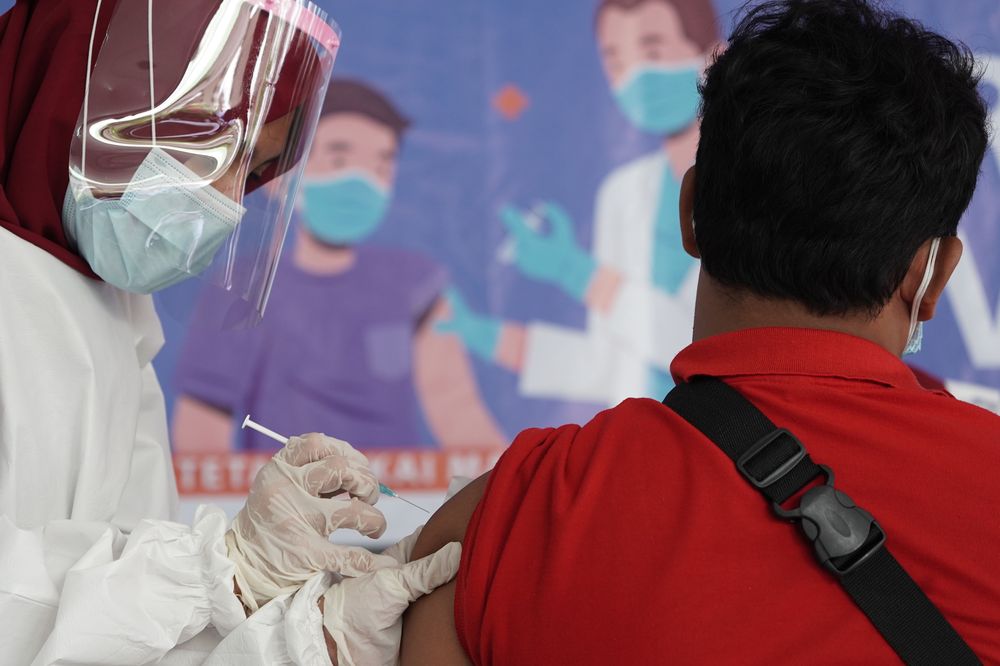 Laos
On July 19, the United States delivered over 1 million Johnson & Johnson vaccines to Laos through COVAX.

On July 25, the National Taskforce for Covid-19 Prevention and Control ordered the deployment of medical staff, medicines, and equipment to provinces that are overwhelmed with Covid-19 patients.

On July 26, the Ministry of Health announced it would increase the duration of quarantine and medical supervision for workers returning to Laos from international countries.

On July 26, Lao authorities in Champasack Province began administering Johnson & Johnson vaccines to the elderly and those with underlying conditions.

On July 26, China announced that it would deliver 1 million doses of the Sinopharm vaccine to Laos.

On July 27, the National Taskforce for Covid-19 Prevention and Control announced that the United Kingdom would provide 415,000 AstraZeneca vaccine doses to Laos in August.

On July 28, the Lao government instructed the Ministry of Information, Culture, and Tourism to coordinate with localities nationwide to prepare to reopen the tourism industry with Covid-19 restrictions in place.

The Malaysian government on July 26 announced that it would not extend the country’s state of emergency, which was set to expire on August 1. Law Minister Takiyuddin Hassan surprised and confused opposition lawmakers by announcing that the government had actually lifted all emergency ordinances five days earlier without informing the public.

The government on July 21 locked down a camp holding 3,000 internally displaced persons in Kachin State due to Covid-19 spread.

On July 22, the junta reported that 736,000 Sinopharm vaccines arrived in Myanmar from China.

On July 24, the Kachin Independence Army said it had received 10,000 vaccines from Chinese authorities in Yunnan Province.

Singapore’s Ministry of Foreign Affairs announced on July 28 that the Singapore Red Cross will send 200 oxygen concentrators to the Myanmar Red Cross Society.

On July 28, the Kachin Independence Army announced it will carry out Covid-19 testing in areas under its control in northern Myanmar.

COVID-19 vaccination in the Philippines started in March 2021 and the country aims to vaccinate 58 million people by the end of the year.

The government on July 23 ordered children ages 5 to 17 to stay at home.

The Philippines suspended travel from Malaysia and Thailand and tightened restrictions in the Manila area until the end of the month.
As of July 23, 2021, around 17 million doses of the China-based vaccine brand Sinovac arrived in the Philippines. This was followed by AstraZeneca and Johnson & Johnson, with 6.86 million and 3.24 million vaccine doses, respectively.

U.S. senator Tammy Duckworth on July 22 announced that the United States will donate at least 1.5 million Covid-19 vaccines to Thailand. Duckworth is Thai-American.

The Bangkok government announced on July 23 that it is immediately opening 23 Covid-19 community isolation centers and will open 53 total centers by early August for individuals waiting for admission to hospitals.

The Thai Red Cross Society on July 24 announced a deal with the local importer of Moderna’s vaccine to procure the company’s second-generation Covid-19 vaccine when it becomes available in 2022.

The Chulabhorn Royal Academy announced on July 24 that King Maha Vajiralongkorn had donated more than $85 million for the procurement of medical supplies and equipment.

Thailand on July 28 received 1.5 million Pfizer vaccine doses from the United States. The Public Health Ministry announced the day before that 700,000 of the first batch of vaccines would be reserved for frontline healthcare workers, while the remaining doses would mostly be given to senior citizens, those with preexisting conditions, and pregnant women.

The National Economic and Social Development Council announced on July 28 that visitors in the Phuket Sandbox program may travel outside the province starting August 1. A Thai Buddhist monk receives a shot of Sinovac vaccine during a coronavirus vaccination drive at the Priest Hospital in Bangkok on May 18. Vichan Poti/Pacific Press/LightRocket via Getty Images

The government on July 22 authorized the T&T Group to purchase 40 million Sputnik V vaccines from Russia without using state funds. The Vietnamese government will be responsible for licensing import, inspection, and organizing free injection programs for all the doses.

The Civil Aviation Authority of Vietnam announced on July 22 that it will only permit two roundtrip flights per day between Hanoi and Ho Chi Minh City.

Vietnam received more than 1.2 million AstraZeneca vaccines on July 23 as part of the contract between AstraZeneca Vietnam and the Vietnam Vaccine Joint Stock Company.

Vietnam on July 24 instituted a 15-day lockdown prohibiting more than two people from meeting in public in Hanoi.

Vietnam on July 24 and 25 received a donation of 3 million Moderna doses from the United States through COVAX.

Ho Chi Minh City on July 26 banned residents from leaving their homes between 6 p.m. and 6 a.m. except for medical emergencies, Covid-19 response efforts, news reporting and delivery, and other essential work.

On July 27, the Ministry of Health announced that Vietnamese firms AIC and Vabiotech had signed a deal with Japan’s Shionogi & Co to locally produce Covid-19 vaccines based on recombinant DNA protein technology.

On July 29th Vietnam is set to receive 665,000 COVID-19 vaccine donations from the governments of the UK and the Czech Republic, the Ministry of Foreign Affairs (MoFA) has announced. 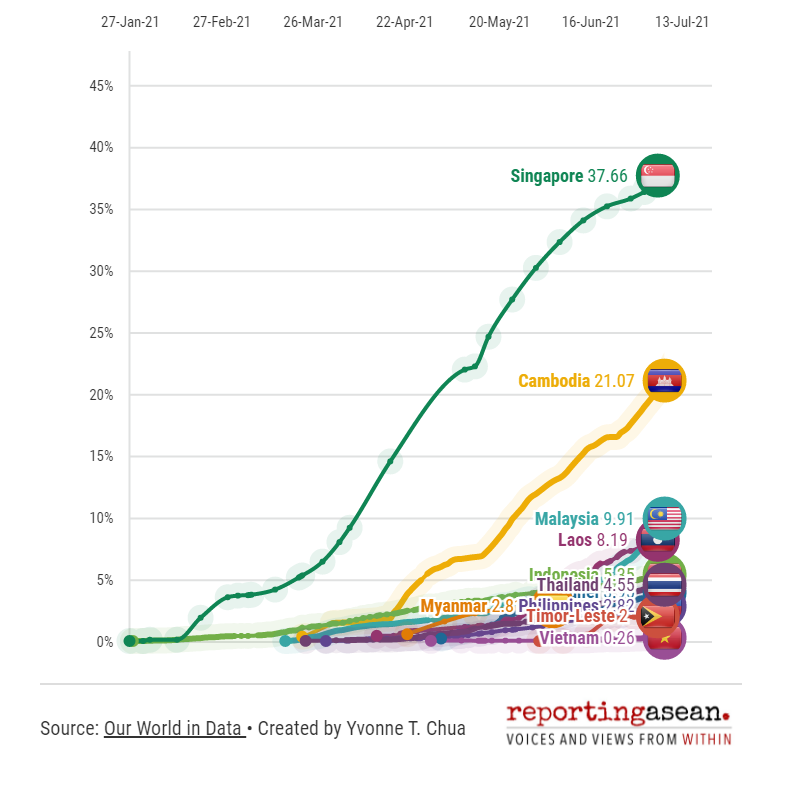 Malaysia Reopening|Where can you visit Malaysia in 2021?